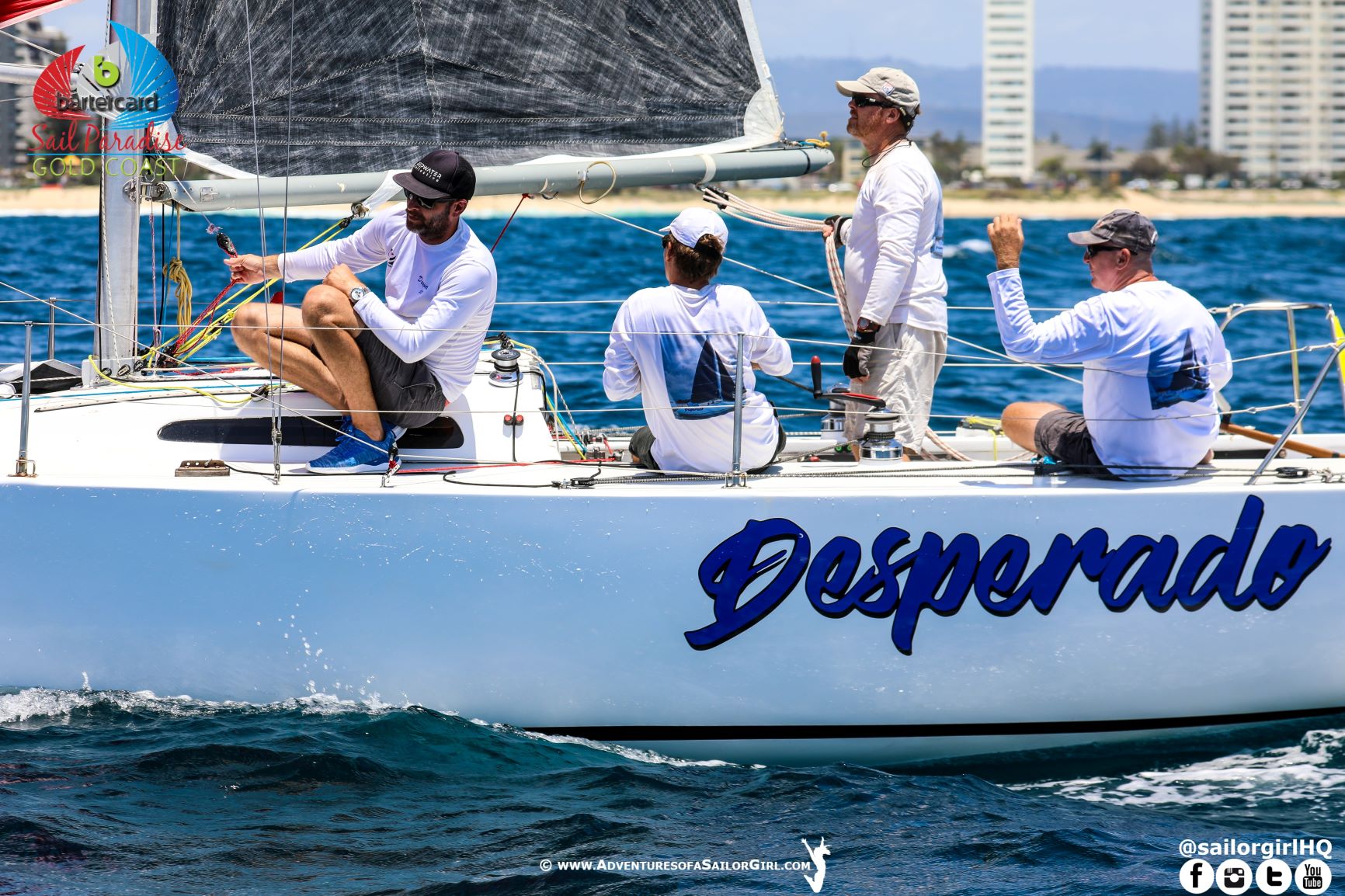 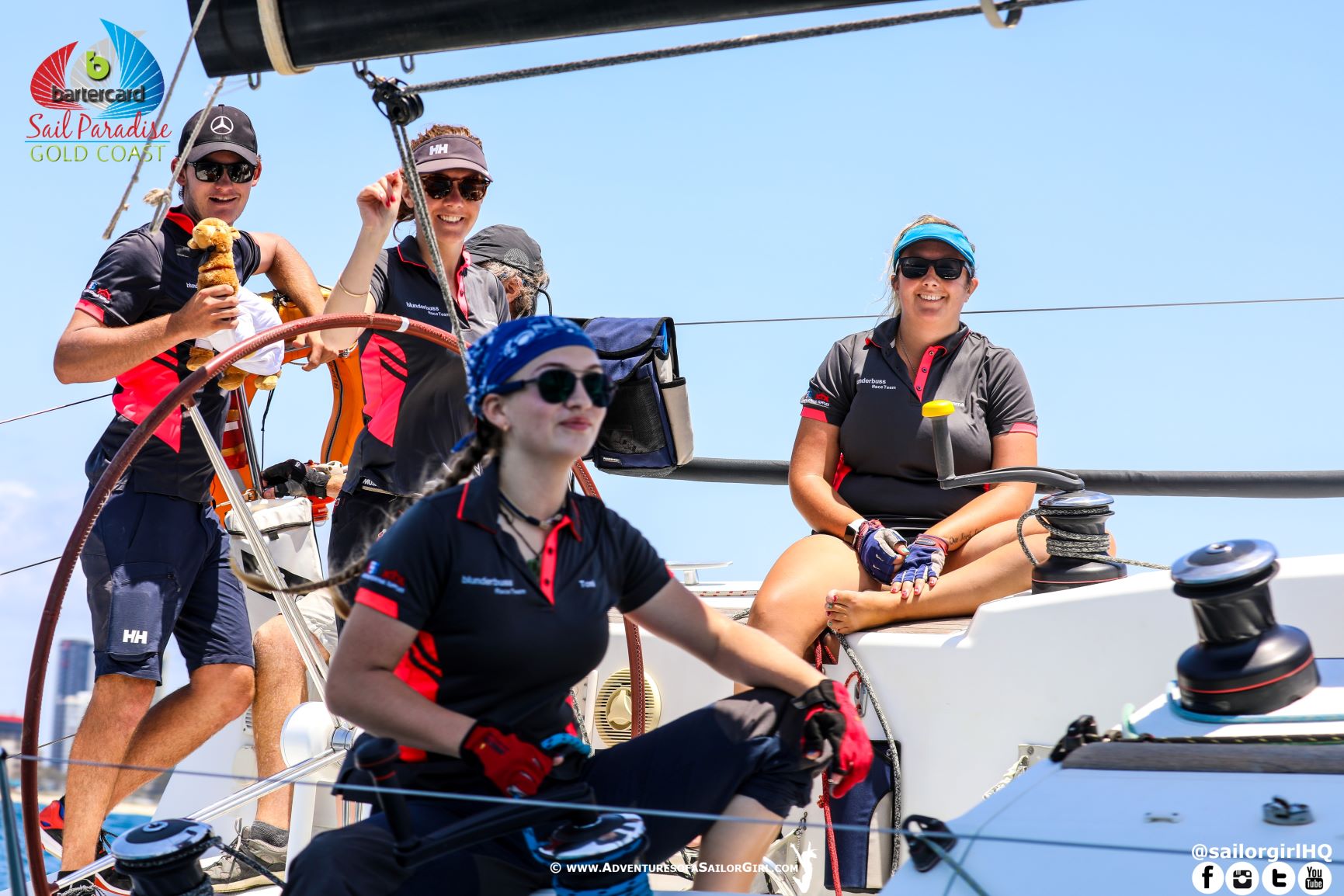 To kick off the new decade, the 11th Bartercard Sail Paradise Regatta got underway today under a sunny sky in a building nor’easterly breeze with a fleet of 33 yachts.

The Race Officer, Southport Yacht Club’s own Mark Dingley opted to start the boats off on a Course 12, the Q1 extended course.

In PHS Division B for race 1, Karlovic’s Rumba took the win, followed by Ball’s Bad Influence and then Chris Larsen’s Wild Spirit.

Cruising Non-Spinnaker Division was won by Pole Dancer, the Catalina owned by Carlos Selby, and the first multi-hull was the Privilege 48’ Catamaran Plan B owned by Grant Scurrah.

First, second and third in race one for the Trailable Division were all from the Skud 18 class, with Wild Goats owned by Ross Manning in first, RTL owned by Neil Rowsthorn in second, and Kamikaze owned by Ben Noonan in third. 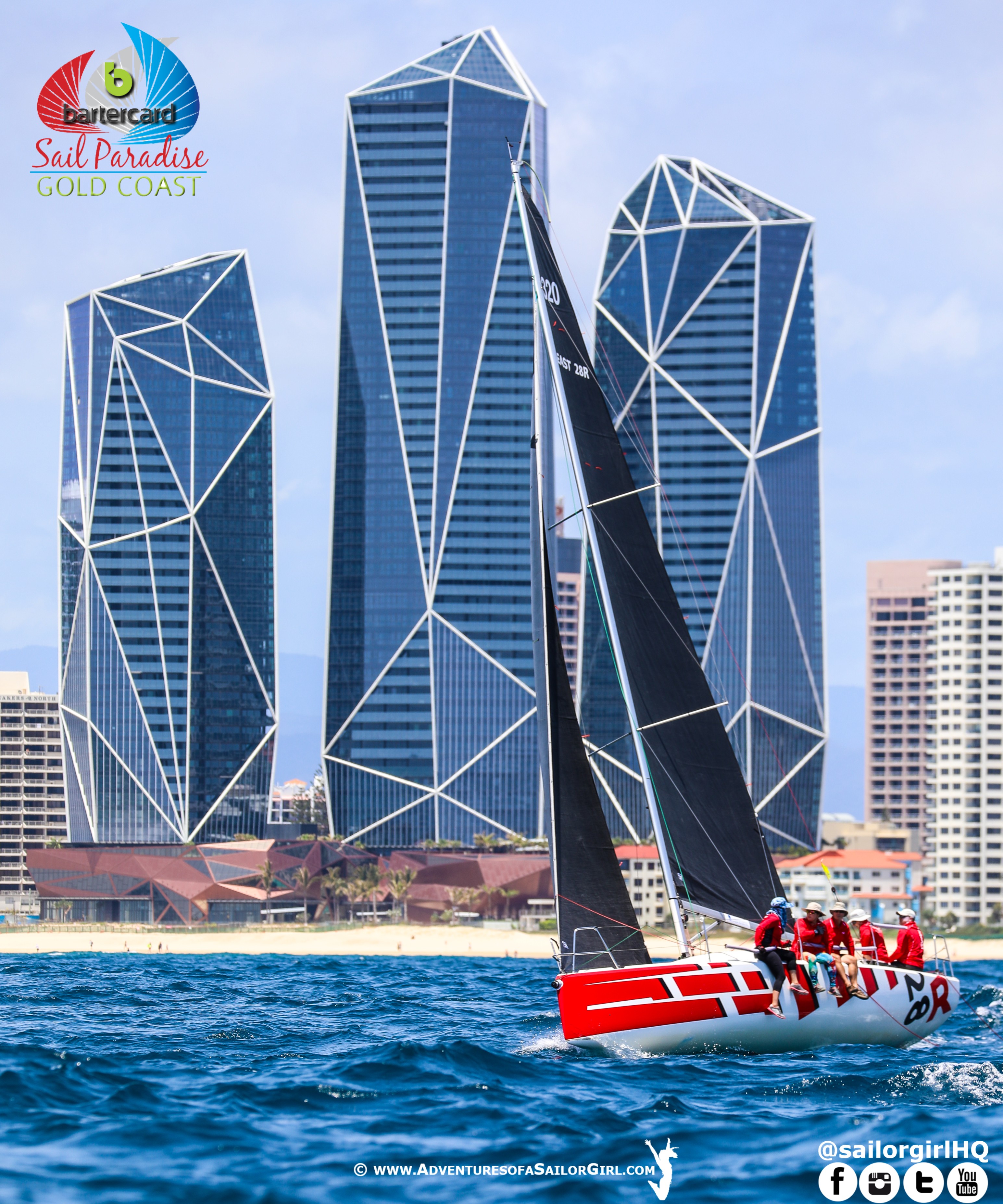 By race two, the breeze had increased to about 12-13 knots and the Race Committee sent the fleet on Course 11, the Q1 course.

Backing it up with two from two wins in the IRC Gold Coast Championship was Desperado, the Atkinson 24 owned by Graham Sherring, with Black Diamond, the RP42 in second once again, and Lambourne’s Lambourdini in third.

PHS Division A was a slightly different story to race one in the second round, with M Daly’s Envy, David Chadkirk’s German Friers designed Cyclone again in second, and Sherring’s Desperado rounding out the podium.

In PHS Division B for race 2, it was a shuffle of the first podium, with Wild Spirit taking the gun, Rumba in second and Bad Influence in third.

Cruising Non-Spinnaker Division was again won by Pole Dancer, the Catalina owned by Carlos Selby, and the first multi-hull the Privilege 48’ Catamaran Plan B owned by Grant Scurrah.

First, second and third in race two for the Trailable Division were again all from the Skud 18 class, Kamikaze owned by Ben Noonan took the win the second time around over Wild Goats, with RTL in third.

The leaders overall after day one are Desperado in IRC, Envy, B52 and Cyclone are tied for the top spot in PHS Division 1, Rumba holds PHS Division 2, Pole Dancer leads the Cruising Non-Spinnaker Division, Plan B leads the multihull division, and Wild Goats leads the Trailable Division.

Nic Douglass was live for the start of race one today, you can watch the live coverage below.

Wrap of the racing from Surf Sail Kite

Images from day one of racing

A full gallery of images from day one can be found here.

Full results can be found here after today’s prize giving.

Prizegiving from day one of racing

FINAL DAY OF RESULT DECIDERS AHEAD AT FINAL DAY OF RACING IN THE BARTERCARD SAIL PARADISE 2019
January 8, 2019
Leave Comment