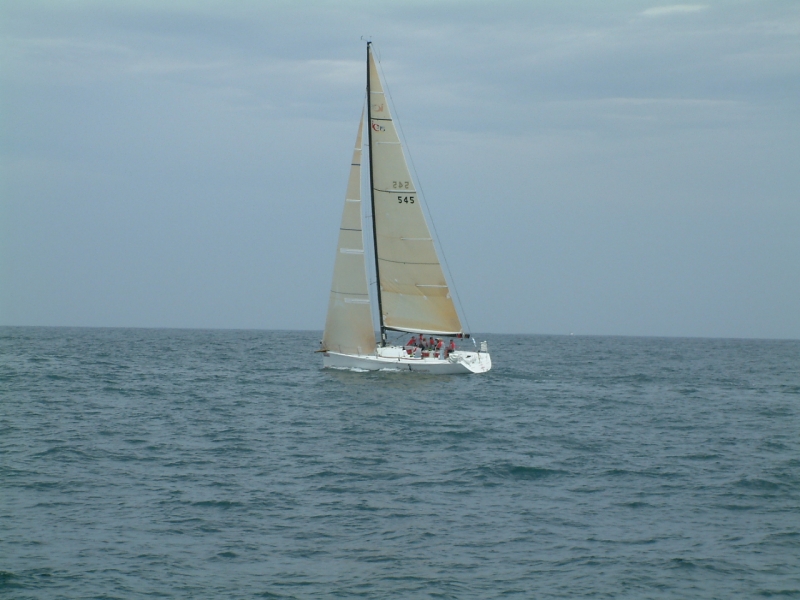 The 2018 Club Marine Pittwater to Paradise Regatta, commencing Tuesday 2 January, has its share of under-30s sailing talent in its ranks this year. Some are newcomers to sailing and others are seasoned sailors who have hundreds of nautical miles under their collective belts. All of them are primed and ready for the 2018 P2P, motivated by equal parts camaraderie and competitive spirit.

Seven yachts in this year’s Race have sailors in their 20s onboard, among them, Dreki Sunnan, formerly Victoire, the Beneteau First 45 bought in mid-2017 by Ken Holmes. With its Norse name meaning ‘Dragon of the South’, Dreki Sunnan will welcome onboard three under-30s, lured to the challenge by Ken’s initiative to support and train the next generation of sailors.

Named in honour of Ken’s father’s conviction that the family came from Viking stock, Dreki Sunnan has an enviable pedigree and crew that is half extremely experienced and the other half new to sailing.

“The majority of our foredeck crew are undertaking their first season of offshore sailing,” said Ken. “It’s part of the training program we have put together to get young people interested in sailing, and in particular, bluewater racing, and then train them up to a standard where they’re confident to take on the greatest challenge of all, the Sydney Hobart.

“We’re hoping to be reasonably competitive,” continues Ken. “The boat can certainly do it, if we can push it and get decent wind behind us. The yacht does well in heavy conditions – 25 knots and above.

“We are looking forward to mentoring the younger chaps, both for their enjoyment of the sport and passing on the baton for the future of the sport.”

This year, Ken, an environmental scientist, will complete the race, “enjoy a few beers at SYC” then fly back to Sydney without taking part in Southport Yacht Club’s Bartercard Sail Paradise Series.

“Regrettably, I have business commitments and have to go back to reality! The crew will take the boat back and I will fly back.” A proud Blues supporter, Ken and crew will be flying the flag for NSW in this year’s inaugural State of Origin Trophy, hoping to contribute points to claiming it for NSW.

“We’ll say it’s a bit of fun, but there will be a serious side to it now there’s a trophy up for grabs.”

One of the three young guns onboard Dreki Sunnan is John Lewin, a 26 year-old pilot based in Brisbane, in his first year of sailing and working hard to learn the ropes ahead of the P2P – his first offshore event.

“My mum and dad have been involved in sailing and yacht deliveries for many years, and they will be crewing on Dreki Sunnan this year as well,” he explained, adding that it would have been a “family affair” including his brother, Greg as well, but he had prior commitments and could not make it.

John’s dad, David, and Ken Holmes have been friends since their Uni days, hence the invitation for the 2018 P2P.

John, who will be joined by his two mates, James Rowlinson and Floyd Higgins, also 26, said the idea to compete in a Sydney Hobart came about as all good ideas do, “over a few beers”.

“We decided to get some experience under our belts and gear up for the big race in 2018. I’m on the mast and bow, and learning how to fly the spinnaker. I hope to be available for more time onboard in 2018 to really get to grips with the boat and what’s needed for such a challenging race.”

Meantime, ahead of the P2P, John for whom the race is a one-way trip after Christmas in Sydney with the family, said he is “very happy and confident” with Dreki Sunnan. “It’s a fast boat and there’s lots of support and encouragement from the older guys. If it all comes together, we could be in with a chance.”

Sailing on Farr 45 Pretty Woman, Liam Bennett is a 25 year-old from Mona Vale with more than a decade of sailing experience to his credit, rising through the Youth Program at RPAYC and cutting his teeth on lasers.

“The owners of Pretty Woman, Richard, Russell and Michael [Commodore of RPAYC], have a big commitment to youth sailing and invite young sailors onboard for big races. I have been crewing each Saturday for a while, so pretty much know the boat inside out by now.”

Assigned the role of “Chef” on official entry documents, Liam attributed that to his Captain’s wry sense of humour. “It must be a joke because I get sick if I spend too much time down below, or maybe they think I sleep too much? Either way, I am a trimmer onboard.”

Liam is hoping Pretty Woman will stay on at Southport for the Bartercard Series, planning to spend the time off from his day job as a surveyor enjoying the sunshine and good sailing on the Gold Coast. “It’s a good getaway during the Christmas break,” he said. “I enjoy sailing with the crew of Pretty Woman. We’re extremely tight knit and the older, more experienced guys really give us a sense of safety and confidence doing the offshore races. There’s no panic, everybody knows their role. It’s a well-oiled machine.”

Oliver Court, 21 years-old from Manly in Sydney, is looking forward to his first P2P on Nine Dragons, which he described as “a real weapon” with more than a strong chance in the Race.

“It has a formidable reputation and awesome camaraderie, so I just had to jump onboard.”

Oliver, an Engineer studying Architecture, came to join the crew of Nine Dragons at the recommendation of his mate, a Bowman on Bob Cox’s Dk46. “I joined the CYCA a few years ago after hanging around there for a while, but I have been sailing since I was about 14. When my friend told me about Nine Dragons, I met the owner and sailed in the Sydney to Newcastle with them. He said I was a nice young fella and invited me to sail the P2P, and I was tickled pink!”

He has been sailing on the boat for close to a year, taking part in high intensity, windward and leeward races, and said he’s confident Nine Dragons has the stuff to take line honours. “I have a good feeling about it. It’s a good fun boat. Winning and having fun are synonymous.”

Gold Coast local favourite, Auric’s Quest will welcome Chris Morrison, 27 year-old structural Engineer onboard for this year’s P2P. Now living in Darwin, Chris did much of his sailing at SYC where he lived for five years and has been crewing with Auric’s Quest for one year.

“I am friends with Andy Gage who introduced me to the owner, Fred. I sailed in the Brisbane to Keppel in August with them and we were very pleased to finish. A lot of boats pulled out due to weather. We are doing the P2P with the aim of getting some bluewater experience together ahead of the Brisbane to Noumea Race in June 2018. That’s the plan.”

Chris is looking forward to arriving at Southport, his former haunt. “It’s fantastic to step off the boat in the Club overlooking the Broadwater. There’s nothing like it!”

Of Auric’s Quest, Chris said “it’s a gorgeous boat, so easy to sail on. I reckon we have as good a chance as any yacht in the Race”.

SYC Commodore Kerry Noyes said it was heartening to see young sailors in strong numbers this year. “Young people sailing at that level are usually doing the Nationals around this time, so the clash makes it hard to attract young people to the P2P. We’re aiming for more each year, including up and coming young women. The forecast looks promising – a southerly, which will push them up the Coast and make it very close racing.”

RPAYC Commodore Michael Lockley, co-owner of Pretty Woman and taking the role of Navigator in this year’s P2P, said a focus on Youth Development is a major aspect of the Club and the event.

“Over the years we have had many Youth Development sailors on our boats heading north, including Tom Spithill and Jimmy Spithill. And it’s not just the guys. We have had Nina Curtis, the Silver medalist at the London Olympic Games in 2012, among many others.”

According to Michael, the Youth Development program begins with around 100 youngsters starting out on Optis, then moving through 29ers, then 49ers, into their 20s when only about 30 of them will remain in sailing.

“There are so many other things competing for their time at that stage of their lives. But, it’s a great formula – a mix of experience and enthusiasm. It’s vital for the sport and it helps us old blokes out with the extra muscle.”

The official weather briefing will take place at 9am on Tuesday 2 January at RPAYC.